Phase transition and hysteresis in the context of storage problems

Lithium-ion battery: Rechargeable lithium-ion batteries are used in mobile devices like cell phones and laptops. For applications in electric or hybrid vehicles the efficiency, capacity and safety must be improved considerably. To this end a detailed understanding of the involved chemical and physical phenomena is mandatory.

During discharging of a lithium-ion battery, lithium atoms reversibly will be stored on interstitial lattice sites of the crystals of a many-particle electrode. 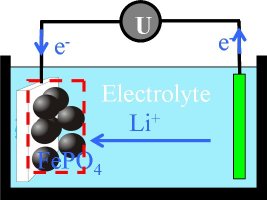 During charging and discharging of a LiFePO4 battery the lithium atoms form a two phase system with a lithium-rich and a lithium-poor phase. The objective is to find a suitable description of the underlying effects and to simulate the hysteresis in the capacity-voltage diagram.

Scenario A: All FePO4 particles behave identical. This implies that the phase transition simultaneously occurs in all particles implying that the battery can be described by a single particle model, i.e. the Core-Shell-Model.

Scenario B: The particles behave differently. The phase transition occurs within in the particle ensemble. On that principle a stochastic many-particle model and an equivalent Fokker-Planck-Model is developed. Both models correctly predict the voltage-capacity-diagrams for large and low charging/discharging times as well. Moreover the models allow the simulation of the phase transition within the ensemble for varying particle size distribution. 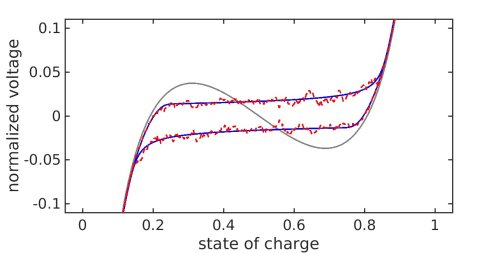 During the reversible storage of hydrogen in magnesia crystals a hydride phase will be formed. This process and its inversion is accompanied by phase transition and hysteresis. An active research goal is the modeling and simulation of the hydration and dehydration processes.